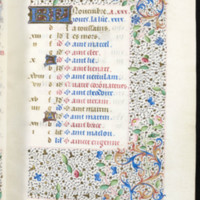 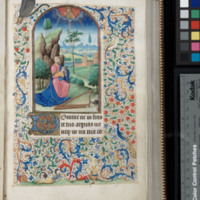 Devotion in the Details 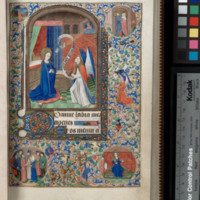 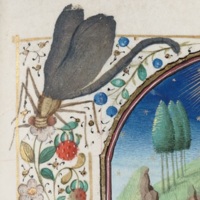 Movement in the Margins

MS Pryce C1, also known as The Vosper Hours, is a sumptuous example of the classic Book of Hours. This elaborately decorated manuscript dates from the late fifteenth century and was made in Langres, France. The book exhibits the stylistic trends and artistic developments common to many contemporary illuminated manuscripts. Every leaf has been lavishly illuminated with colorful marginalia of scrollwork, floral and plant tracery, birds, insects, and some human-like figures. While many Books of Hours contained materials such as owners' names and hand-written texts and annotations, this manuscript has no distinguishable traces of ownership. Seventeen full-page illuminations mark the beginning of important textual sections, as well as decorative initials and line-endings. The exquisite illuminations and decorations are attributed to the artist known as the Master of the Troyes Missal.

The book is remarkably well-preserved and shows little evidence of heavy use. Its substantial size (235 mm x 162 mm) suggests that it would have been cumbersome to carry to church or in public worship settings, and it was probably intended for private, domestic devotions. By contrast, MS A6 (also featured here) is a much smaller book and exhibits much greater wear, indicating its use as a portable, intimate book that would have traveled with its owner and been used frequently both in public and private.

The Vosper Hours was purchased by the Spencer Research Library in 1958, after coming into this country five years earlier from England. The history of the book's path to Kansas is sketchy, as currently no records prior to its 1953 sale through Sotheby's London have been recovered. One clue suggesting that it was already in England in the late nineteenth century is the book's specially-built case. It bears the insignia and address of a London-based Stationer that was in that location only between 1868–1895. So far, no information has been recovered to show who brought The Vosper Hours to England or indicate the identity of its original owner.