The seven illuminated pages in MS A6 are small, yet they contain a great amount of detail and are delicately painted. The marginalia and large initial details have analogies with the contemporary Vosper Hours in their margins filled with acanthus leaves, flowers and vines, and in the iconography of the illuminations. Despite their similarities, the Vosper Hours and MS A6 were likely made in different places. Consideration of the artist’s technique in painting may eventually lead to the discovery of other manuscripts decorated by him. Distinctive stylistic elements like the modeling of faces with bold grey shading around the nose and eyes in the scene of the Pentecost, or the way that Mary's loose golden hair is finished with small, black hatched lines could help identify the artist.

Similarly, iconographic variations may help localize the manuscript. The Office of the Dead in MS A6 is a classic composition in which clerics and mourners bury a body in a churchyard. However, the excessive pileup of skulls up to the eaves of the charnel house in the background appears in mid-15th-century manuscripts made around the same time in the Champagne region of France. That may be a good place to begin looking for the artist.

This Book of Hours only includes images for three of the eight Hours of the Virgin: the Annunciation, the Adoration of the Magi, and the Nativity. Because there seem to be no folios missing where each hour of the Virgin begins, this may have been a cost-cutting measure reflecting choices made when the book was commissioned. Because artists billed patrons by the number of illuminations, booksellers would work with patrons to personalize a handmade book like MS A6. Personalization by owners was part of the production of Book of Hours, even after the advent of printing, as Summerfield C65 exemplifies. 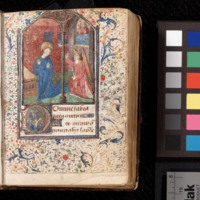 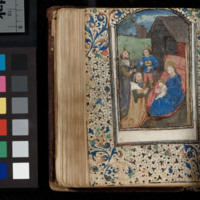 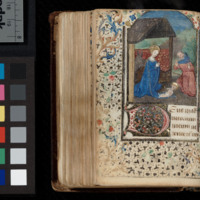 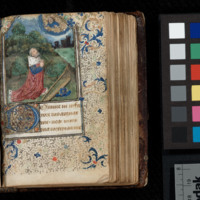 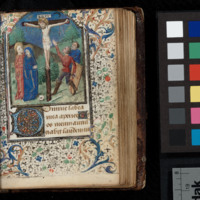 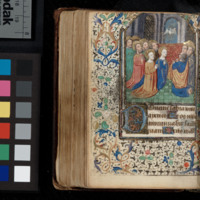 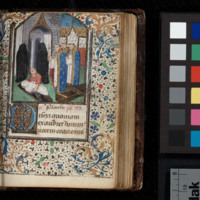