MS A6: Devotion Through Time

MS A6: Devotion Through Time

The calendar appears at the very beginning of a Book of Hours, preceding all prayers and other devotional texts. A calendar helps track feast days, or daily celebrations of saints, confessors, and important patrons or relics. Every calendar contains major feast days like All Saints and Candlemas (see fol. 1r, 2 February, la chandeleur), but each calendar also represents an opportunity to celebrate local saints or miracles. Ferial days, or weekdays on which no feast or saint is celebrated, were quickly filled up with local flair. The resulting variation across regions of France and beyond were so great that the Council of Trent in the 1560s sought full reform and abolishment of local rites that could not submit sufficient history or proof.

The calendar thus adds a layer of devotional functionality to any Book of Hours and connects the reader to the Church both as a whole and as local institution. Preceding the era of major reform, the MS A6 calendar reflects patronage and saintly devotion particular to regions near and around Paris (Île-de- France): Saint Lucien’s martyrdom in Paris is observed 30 October (see fol. 7v, s. lucan), and the translation of King Solomon’s relics is observed 11 February (see fol. 1r, s. salmon). Comparing spelling variations between ozan, osan, and offran for 15 October also reveals a Parisian source (see fol. 7r, s. ozan).

Although the MS A6 calendar is nowhere near as elaborate as some extant manuscripts from Paris, the design and text recall the influence of similar scribal and artistic work, especially that of artist Maître François. Its functionality also pales in comparison to other calendars: Spellings are inconsistent, a Dominical Letter is missing in March, and June only has 28 days. 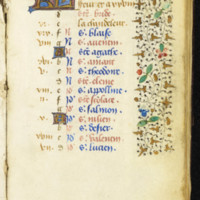 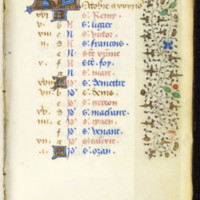 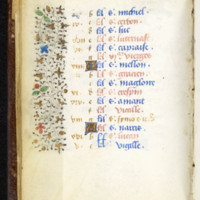