MS A6: Words of Worship

MS A6: Words of Worship

Filled with Psalms, prayers to the Virgin, Hours of the Passion, invocations of the saints and the clergy, and memorial services for the dead, the texts contained in Books of Hours put Christian worship into the hands of the laity. As a means of further internalizing faith, private readings of brief biblical excerpts allowed the reader a greater sense of personal closeness with God. While Books of Hours provided greater means for personal prayer, its popularity embodied a growing, public interest in devotion.

MS A6 is written in Latin, implying that it was likely created for a more learned audience, however Books of Hours often included prayers, such as the Seven Joys of the Virgin written in local dialects, as happened in the Vosper Hours. A small number of incomplete folios written by a different scribe at the end of MS A6 reveals that it was a work in progress, to which an owner added verses or prayers. Slight staining at the corners of the manuscript's pages shows that it was well used by its different owners, and that the text within remained important to its audience for many years. 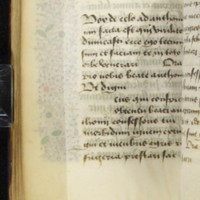 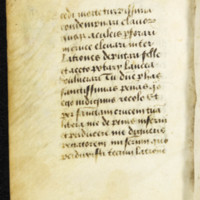 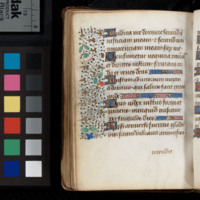